Transforming the United Arab Emirates into a knowledge‐based economy: The role of science, technology and innovation, Prof. Allam Ahmed and Dr. Ibrahim Alfaki

Transforming the United Arab Emirates into a knowledge‐based economy: The role of science, technology and innovation, Prof. Allam Ahmed and Dr. Ibrahim Alfaki 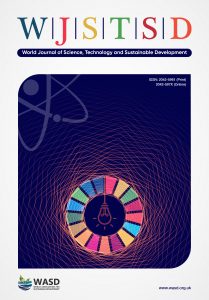 Purpose: This paper aims at exploring the role of science, technology and innovation (STI) in transforming the United Arab Emirates (UAE) into a knowledge economy (KE) by initially assessing the country's achievements implementing the KE pillars. It further evaluates the country's STI capacity and competence in exercising adoption and diffusion of knowledge.
Design/methodology/approach: A situational analysis and a comparative approach were exploited to describe the UAE's position in terms of transition to a KE, highlighting weaknesses, strengths and opportunities. Related discussions were supported by data made available from several international sources. The country's worldwide performance was particularly matched against that of the other members of the Gulf Cooperation Council (GCC) together with two more Asian transformation economies and also a few examples from other Arab and Muslim countries.
Findings: Apparently, the UAE has made important progress in the implementation of the KE pillars and transitioning to the innovation‐driven stage, particularly at the macro‐economic environment and quality of infrastructure levels, notably the ICT sector. However, the county is facing several challenges that require concerted efforts and rigorous follow‐up. For instance, the UAE is lagging behind most transformation economies and some GCC countries when it comes to investment in education and R&D activities. This hurdle impeded the country's ability to absorb, adapt and create new technology and knowledge. As a result, the country's economy is experiencing a negative trade balance in foreign technology transfer. The comparative and situational analysis methodology adopted in the context concluded several lessons and policy remarks.
Originality/value: Using the most updated data, this exercise stems from the country's need to examine the current status, a necessary step for realization of new prospects and adoption and application of future policies and programs.
Keywords: Knowledge economy; STI; GCC countries; R&D; Assessment; United Arab Emirates.
Citation: Ahmed, A. and Abdalla Alfaki, I.M. (2013), "Transforming the United Arab Emirates into a knowledge‐based economy: The role of science, technology and innovation", World Journal of Science, Technology and Sustainable Development, Vol. 10 No. 2, pp. 84-102. https://doi.org/10.1108/20425941311323109

Contexts of utilization of ICT by medical practitioners in private hospitals in Osun State Nigeria, Dr. Williams Nwagwu and Adio Akeem
Implications of mobile devices on ITS freight roadmaps ahead, Dr. Magnus Andersson and Henrik Sternberg