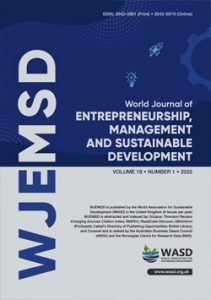 Purpose: The purpose of this paper is to examine the impact of trust, personality and risk taking on entrepreneurial intentions (EIs). In this perspective, it explores gender differences among nascent and actual entrepreneurs in the context of the United Arab Emirates (UAE).
Design/methodology/approach: Survey data were collected from two sets of populations: 370 students attending business courses in a university in the UAE (as proxies to nascent entrepreneurs) and 324 small business owners/operators (as proxies to actual entrepreneurs). The scales used in the study were borrowed from previous research and were also empirically confirmed through reliability tests.
Findings: In support of previous research, analyses of variance confirmed the hypotheses that females are less inclined to become entrepreneurs and are less likely to take risk. Females were also found to be less trusting than males. Regression analysis revealed that, the intention to engage in entrepreneurship is most significantly affected by the propensity to trust. These confirm the study hypotheses.
Research limitations/implications: This study is set in a single country and as such, its findings may be constrained by cultural/national specificities. Future research could consider examining the variables of this study (particularly gender differences and their relevance to the effects of trust and risk taking on EIs) in a wider cross-national context.
Practical implications: The findings of this study clearly indicate that trust is an important variable that can be cultivated at the pre-entrepreneurial stage so that future entrepreneurs (females in particular) are appropriately equipped and geared to cope with risk in entrepreneurship activities.
Originality/value: Research on gender, trust, risk taking and entrepreneurial behaviors in the UAE/Middle East context remains lacking. Also, studies using samples of both actual and nascent entrepreneurs remain lacking. This study fills these gaps and also provides a platform for further understanding the importance of gender differences in relation to trust, personality, risk taking and EIs.
Keywords: Gender; United Arab Emirates; Personality; Risk taking; Trust; Entrepreneurial intention.
Citation: Zeffane, R. (2015), "Trust, personality, risk taking and entrepreneurship: Exploring gender differences among nascent and actual entrepreneurs in the United Arab Emirates", World Journal of Entrepreneurship, Management and Sustainable Development, Vol. 11 No. 3, pp. 191-209. https://doi.org/10.1108/WJEMSD-08-2014-0025