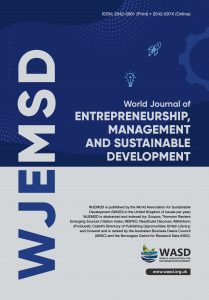 Purpose:As recycling is associated with various environmental benefits, it is important that it is encouraged in Malaysia. Taking the disappointingly low recycling rate in Malaysia as its backdrop, the purpose of this paper is to examine recycling intentions and behaviors among micro-entrepreneurs in Kelantan, Malaysia, drawing on the theory of planned behavior.
Design/methodology/approach: The study adopted a cross-sectional design and stratified random sampling method to select 200 informal micro-entrepreneurs from Kota Bharu, Kelantan; then, quantitative data were collected through structured interviews. For data analysis, this study adopted variance-based structural equation modeling, i.e. PLS–SEM.
Findings: The findings indicated that environmental awareness had a significant positive effect on micro-entrepreneurs’ attitudes toward the environment. They also confirmed a positive and significant effect of attitude and perceived behavioral control on intention toward recycling and the effect of intention toward recycling on recycling behavior among the study sample.
Practical implications: Policies and programs focused on environmental awareness could nurture a positive attitude toward the environment, which, together with the capacities and resources available, could significantly influence the adoption of recycling behavior among informal entrepreneurs.
Originality/value: It is recommended that both public and private environmental protection and socio-economic development organizations combine their efforts to formulate and enforce policies and programs to promote recycling behavior among Malaysian entrepreneurs, which could spread the recycling spirit among all Malaysians.
Keywords: Theory of planned behaviour; Recycling behaviour; Recycling intention
Citation: Mamun, A.A., Saufi, R.A., Mohiuddin, M. and Fazal, S.A. (2019), "Recycling intentions and behaviors among informal micro-entrepreneurs in Kelantan, Malaysia", World Journal of Entrepreneurship, Management and Sustainable Development, Vol. 15 No. 2, pp. 123-138. https://doi.org/10.1108/WJEMSD-10-2017-0077

The moderating effect of career stage on the relationship between job embeddedness and innovation-related behaviour (IRB): Evidence from China, Muhmmad Rafiq
The diversity of the practice of corporate sustainability An exploratory study in the South African business sector, Lorren Haywood, Douglas Trotter, Kristy Faccer and Alan Brent