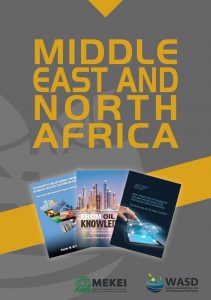 Middle East and North Africa Book Series aims to publish research on the following five core themes of vital importance to the region:

(1) Transforming the oil-based economy to a diverse knowledge-intensive economy based on innovation: learning from best practices, lessons from other nations as well as future policies in the region.
(2) Managing change and innovation in business: strategic innovation models, managing change, strategies for the future, international lessons.
(3) Building a sustainable environmental future: environmental audit; best practices in the region; policies for business and government; lessons from abroad.
(4) Human Resources for the knowledge economy: assessing current transformation practices; identifying best practice examples; building local competences in innovation and leadership.
(5) Evidence based policy and business development; capability building in policy making and in business, assessing business leadership in the region; creating the new generation of Middle Eastern business leaders.

We are very keen to feature country-specific case studies from all countries in the Middle East and North Africa region. We welcome contributions from all senior academics, professional leaders, students, etc. Please check our experts network directory and upload your details here. We are also happy to include your videos in our dedicated YouTube channel.

Theme:
Many consider the Middle East and North Africa (MENA) region as one of the most important emerging parts of the world economy in the 21st century. MENA is also strategically vital as it produces the majority of the world’s oil. However despite the region’s oil, most MENA countries score lower on Human Development Index (HDI) world ranking, with GDP, productivity and investment rates well below the global average. It is, therefore, becoming widely accepted that the dominant economic model of the region – based on the public sector, oil incomes and workers’ remittances –is not up to the challenges of modern globalisation and the needs of advanced knowledge-based societies. Given the apparently contradictory needs of economic growth and environmental conservation, it comes as no surprise that knowledge management (KM), innovation and sustainable development (SD) have had such a powerful influence in contemporary discussions on the future of the region. The book series will act as a forum to provide senior academics and leading scholars, government and policy maker, business professional (individuals and societies) with the best available knowledge essential for achieving SD.

CALL FOR CHAPTERS: 15 October 2020
Marketing, Entrepreneurship and Society in the Middle East and North Africa

This edited book on Marketing, Entrepreneurship and Society in the Middle East and North Africa (MENA) offers both introspections and retrospections on the role of marketing and entrepreneurship in shaping the Middle Eastern identities within their indigenous Middle Eastern contexts. It treats marketing and entrepreneurship systems as social systems – each system possessing its own unique identity boasting both temporal and spatial characteristics and in which no particular epistemology prevails as an exclusive account of knowledge. The book puts together, for the first time, original and cutting-edge contributions aimed at illuminating and charting new directions for researching, teaching and understanding of this subject matter. In order to assess the suitability of submissions, authors are required to submit an abstract (100–150 words maximum) which concisely and clearly outlines the purpose, methodology, findings, contribution, limitation as well as practical implications (if applicable) of the chapter. Please consult the Guidelines for Authors before submitting your abstract/chapter. Manuscripts, in the first instance, should be forwarded to Janet Snow (Janet.Snow@wasd.org.uk).

CALL FOR CHAPTERS: 17 January 2021
From localization to building national capacity towards Qatar’s Vision 2030